Umbrella and Top 76-6 had the highest sugar annual productivity of 10 Mg per ha.

Top 76-6 had the highest ethanol annual productivity of 4800 L per ha.

Sweet sorghum is a sugar rich crop that has been considered an alternative feedstock to sugarcane for ethanol production. A full year production cycle is possible as sweet sorghum is capable of multiple harvests. In this work we present experimental results for stalk biomass and sugar productivities, individual sugar distribution at harvest, ethanol yield and productivity of several sweet sorghum varieties and three harvests, the first cut during the rainy period and two ratoon crops during the dry season. The fresh stalk biomass productivity was different among varieties and harvests. All varieties had a lower than expected first harvest productivity, short waterlogging periods during the rainy period might have been the cause, and Top 76-6 showed the best value, 118 Mg per ha. The stalk sugar content dropped drastically for the second ratoon crop which also had an atypical sugar distribution, sucrose content decreased and reducing sugars increased, a premature harvest might have been the possible cause. Umbrella and Top 76-6 had the highest sugar productivity around 10 Mg per ha year. Fructose was the only remaining sugar after fermentation. Top 76-6 showed the highest ethanol productivity of around 4800 L per ha year and the best overall process efficiency. 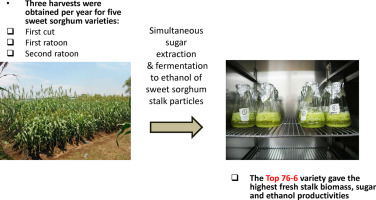